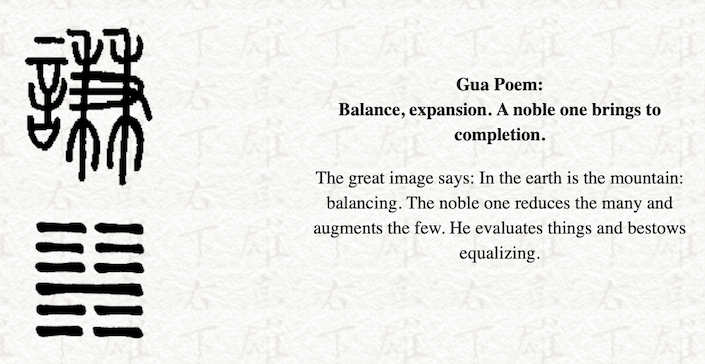 9
It is better to leave a vessel unfilled than to attempt to
carry it when it is full. If you keep feeling a point that has been
sharpened, the point cannot long preserve its sharpness.

When gold and jade fill the hall, their possessor cannot keep them
safe. When wealth and honours lead to arrogance, this brings its evil
on itself. When the work is done, and one’s name is becoming
distinguished, to withdraw into obscurity is the way of Heaven.

Humility is part of the “code of the West” as I learned it growing up. “He’s not so special,” my mom would say about someone, maybe a guy I had a crush on or some politician or a TV personality. “He puts his pants on one leg at a time just like everyone else.” And then there were the proverbs, “Pride goeth…etc.” After a few humiliations and failures, and I got the point.

I’m a humble person. I always have been. I always have hated being pushed front and center. I have never had any real ambition, but many things I’ve wanted to do. Success in any of my endeavors would have led to a better financial situation, but whatever I have had has always been enough.

Humility doesn’t mean you don’t try to do your best. It means understanding that what matters is the doing and that, after the GREAT moment has passed, no matter how GREAT that moment was, you go home, change out of your fancy clothes and put your jeans back on…

One leg at a time.

I always liked the phrase, “Go with the flow.” It is one of those great bits of advice that encourages the observation of the obvious. We’ve had a lot of “flow” down here in the San Luis Valley this spring/summer with the rivers being so high and people from Texas (sorry, but it’s true) trying to drive their jeeps across the rivers anyway.

But I’m not sure we should always follow it. I think it depends on what the “flow” is. If it’s a river running high and fast, yeah. If it’s the ascendancy of evil? I am not sure. The I-Ching (which is all about going with the flow) advises to make progress in the good as a way to fight evil. I think that’s good advice, but no two people are going to agree about what “the good” is.

As part of learning about China, I studied the I-Ching a little, not so much as a tool of divination but as work of philosophy. It has a lot to say about danger and how to escape. Sometimes you can’t escape. You simply have to survive. That’s the message of Hexagram 29, danger. The image is water on water. That’s about as fucked as it gets because, apparently, this abyss is not yet full at which point the water would begin to drain away.

The lines are interesting, too. In the first line, a person is trapped underwater and makes everything worse by going into an underground cavern which is 100% likely to be flooded. In another line the poor guy is unable to make up his mind and ultimately ends up in the same cavern. There’s little possibility for progress in this hexagram. It’s all “Should I Stay or Should I Go?” But it doesn’t matter what you do, determine to stay and wait it out or fight your way out of the hole, you’re in deep, uh, uh, water. The only solution is to let the water carry you out of the abyss; to do that, you must float… If you float you are literally “going with the flow.”

Five years ago today — according to my Facebook memories — I filled out the paperwork to list my house in Descanso, CA, and put it on the market. The date I chose for that was July 18. Did I want to? No, not really. I’d hoped — planned — to retire there in the friendly mountains and live in the enchanted cottage forever. I picked that day because it was the six-year anniversary of ejecting the Evil X from my house, AND it would be the last day I would ever teach anyone anything (on purpose). Everyone said I was brave, the courage part was long over by the time I listed my house. It took courage to see what was really in front of me, to face reality, the flooding river. That happened in the Antler’s Hotel in Colorado Springs in March of that year when, after looking at some houses in Colorado Springs, I filled out my retirement papers. I didn’t want to, but I felt I was being pushed by powerful and invisible forces.

Leaving teaching and leaving CA were two things I hadn’t imagined, but the two wondrous things had been transformed from something great to the abyss. Staying would shove me further and further underwater financially, and I had grown to hate a job I had always loved. Fighting it was absurd and I loved Colorado. I allowed myself to float to the top of that mess. I remember vividly the night I left for good. I locked the front door and drove down the mountain. I stopped at McDonalds for dinner which I ate in the car. I felt as if I were weightless.

I might be a spiritual person, in my way. But mostly I think things are OK in some inscrutable way that I don’t understand, and the biggest mystery is my response to things. A long, long, long time ago in a philosophy class, reading Aristotle, I read this, “Know yourself.” I was taking Greek at the time so I translated it and wrote it on a little slip of paper and taped it to the mirror in the bathroom I shared with my suitemate.

She had no idea. It was a secret message to me. Of course, at 19, I thought I well on the way to self-knowledge.

Ha ha ha ha. I actually DID know some stuff, but a lot of the stuff I had gotten right and forgot over time. OH well.

Sometime after I returned from China, I got an old copy of the I-Ching at a used bookstore. I don’t believe in trying to find out what the future holds. I think it’s dangerous and wrong. I was reading various Chinese novels in which the I-Ching plays an important part. I had also had an experience in China in which the I-Ching had told people not to allow foreigners into their home, a situation that resulted in my friend (with whom I was traveling on Hainan Island) having to find somewhere for she and her husband and me and my husband to sleep. No hotels back then…

In a lot of the books the I-Ching was used to tell the future, but mostly it was used to help someone see more clearly into a situation in which they’re already embroiled. It also had some lovely aphorisms (quoted in the novels), so I became curious. I found it was an amazing tool for developing self-knowledge and gaining instruction in those trapped-bird-in-a-house moments of life. One of my favorite is the Hexagram 43, Break-through. It really lays out the only way good can defeat evil,

“Finally, the best way to fight evil is to make energetic progress in the good.”

Last year sometime, I was reading something that referenced the I-Ching. I thought, “Ha, I’ll do a reading.”

I thought, “What shock could there possibly be? I’m settled, finally. My brother’s situation is resolved (that had been a huge source of shock for a long time). I have a place to live and more stability than I’ve ever known. Hmmm….”

I didn’t forget it, though.

The hexagram is the character for thunder on top of the character for thunder. Shock is something drastic that you cannot change, thunder in the ground. Living in Southern California, thunder in the ground (earthquakes) was more common than thunder in the sky! And yes. The only way to deal with them was to enjoy them. Sometimes they were actually fun — like the rolling 7.1 that came up behind my friend and I as we were hiking one Easter afternoon. It was like standing on a rollercoaster that was the earth.

And so over the course of the months following my random I-Ching reading, the shock arrived. The advice in the lines is wise and true. In life’s innumerable shocks, it’s always a good idea to hold the spoon and chalice steady, it’s the only way the feelings of dread can be followed by joy.

As for divining the future? It could be that time does not exist. The featured photo is part of a painting I did several years before I ever saw Monte Vista or imagined returning to Colorado. But anyone who’s visited me here or who lives here, will recognize the scene, though the colors of my painting * aren’t quite true in the photo…

*For painting nerds, the painting is oil on an Ampersand Gessobord