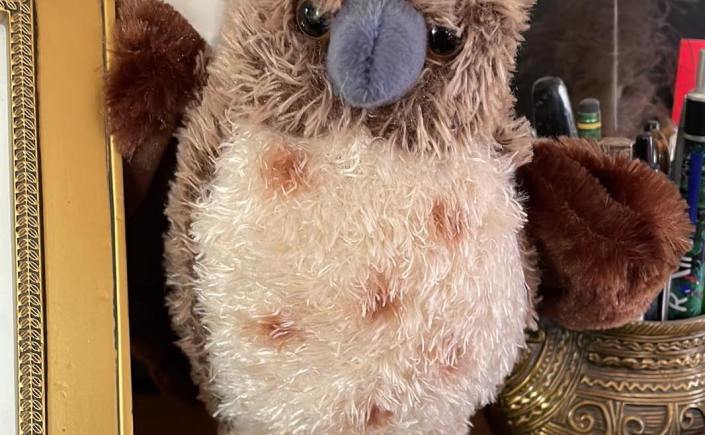 Many people write animal stories in which they project human qualities (desired or actual) onto the animal and then the animal talks. It’s a lot like Edger Bergen and Charlie McCarthy. I’ve spent a lot of time out there with animals — my dogs, a few people, and whatever wild animals happen to be out where I am. I know one thing about these animals (dogs, hawks, eagles, cranes, coyotes, cougars, deer, cattle and horses). They are NOT human. They might seem to hang out with us, but that isn’t what they’re doing. They’re doing THEIR thing, not our things. Personally, I think there’s a lot to learn from that.

I used to hike with a mated pair of red-tail hawks. Seriously. I’d hike, they would be flying along with me. I was 100% convinced I’d found my spirit guide. One day, I was sitting on a promontory and one of these hawks came and flew directly at my face, hovered in the air, and looked at me. Why? It was cool, but he wasn’t saying, “I’m your spirit guide.” He MAY have been saying “Thanks” in red tail hawk language, something like, “thanks for bringing your dogs because they really help us find food.” But we were not “at one” in some mystical hawk/woman union of souls. It didn’t make the experience any less spectacular that there was a human/hawk moment happening in hawk terms. To be suddenly in the terms of a wild creature is pretty amazing but that can include being attacked and eaten.

I have watched a red tail hawk attack a human. That stupid woman had no idea what was going on, because SHE was listening to her Walkman (back in the day) as she ran up a hill that was famous in San Diego for being a “work out.” Listening to music through earphones in a landscape that is home to rattlesnakes. Stupid. The whole world is fucking commodity for humanity. The hawk really didn’t like this woman — her sound? Her way of moving? I have no idea. But the woman kept flailing her arms around and yelling and the hawk kept attacking. My friend and I were on top of the ridge watching this. We’d just “worked out” up that hill though for us it was something else, something like transportation. A hill has the right to be a hill; not an outdoor gym.

“I wish I were her,” said my friend. I just nodded. I really wasn’t sure. I didn’t know why the hawk was so incredibly pissed off. Oooops. I just projected. But it’s true that my friend and I liked hawks. We watched them all the time. We were rooting for the hawk. We didn’t like the woman AT ALL.

To be KNOWN by wild animals requires ONE thing and that is frequent, regular, predictable presence in their world. They just want to know that we’re not going to kill them or kill their young and when they can expect us to be around so they can go for shelter or not, depending on their species. (They might think of us as food at 6 pm, but you know…) But most wild creatures go for cover. That wild animals want safety is an argument for leashed dogs, but I have not always leashed my dogs. I think I made that change after I watched a young dog I owned spy a pack of coyotes and run down the hill to join them. Nothing bad happened — the coyotes knew us because we were up in their world almost every day at 6 pm or so.

Domestic animals. I’ve lived with 27 dogs (and more than a dozen cats, an iguana, a few different snakes and two tarantulas) at this point in my life. All very different in their motivations determined largely by their breeding. They have loved me, and I have loved them, but the terms for that love require a few steps from me into the dog dimension and a few steps from them into the human dimension. Dogs are the BEST at teaching people this important point; they are not human, but they’ve learned over the eons that it is to their advantage to learn to live with us. Horses? I’ve only known one and when I think of him I think, “We humans think we’re so damned smart but, BROWNIE?” He’d learned to communicate in human terms — no, not with words, but gestures, eye contact, humor, telepathy? Why? Because it was the language most often “spoken” in his life, I guess. He didn’t just do that. He was a good teacher to me of HIS terms. I was a very willing student. I knew when he needed hay. I knew when he needed fresh water. I knew when he was lonely. I knew when he thought his owner was funny. I knew when he was glad to see me. He wasn’t even my horse. I was just the most consistent animal presence — besides two of my dogs — in Brownie’s world. Still, I’m not putting words in Brownie’s mouth. That would be disrespectful.

Animals have their nature and we have our own animal nature, too. Most of us live pretty far from that — whatever it is but I think the more you live with animals the more likely you are to acknowledge that you are motivated by hunger, thirst, fear, exhaustion, the need for safety — and, interestingly, curiosity.

Our abstract notion of “love” is not animal. “Love” in animal language is nurturing a baby until it can function on its own. That can be a very harsh thing for an animal because due to high water or something it might need nurturing past the “abandon by date.” I’ve seen that, too. It’s why I don’t watch animal documentaries. I don’t WANT to project my human values on what an animal MUST do in order to survive. BUT from those animals I learned that survival really matters, my PERSONAL survival matters and not only that? It might further the survival of my species.

P.S. the stuffed animal is a red-tail hawk I got for my birthday. I love him. He doesn’t say much, but time will tell… And yes, Bear and Teddy “talk” on this blog but you know, 1) we’re together basically 24/7, 2) who else am I going to talk to? 3) their body language is extremely articulate, 4) it’s just for fun. And Bear really does love snow.