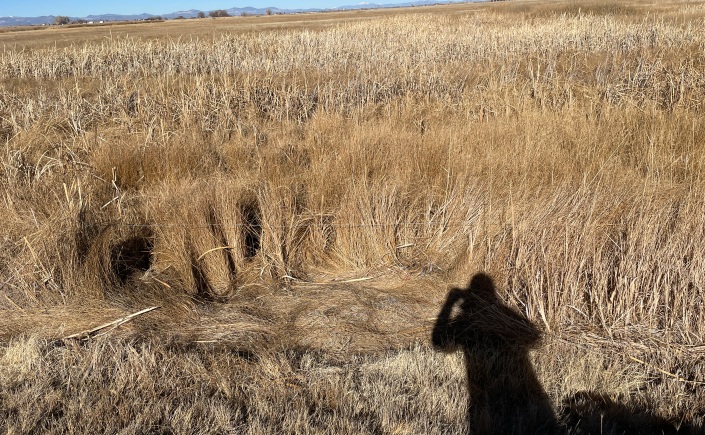 Yesterday Bear and I were out at the Refuge which is probably a huge surprise to all of you, but there you have it. It was a wonderful, silent walk except for a couple of jets flying over the fly-over area. The geese I saw a couple of days ago seem to have made their way further south at the end of the big storm that hit the Rocky Mountains a couple of days ago. There were no ducks. Just a couple of small brown birds brave and hardy in the rushes. White mountains in all directions, infinite visibility, and in all of this one hungry Harris Hawk skimming the ponds and the grasslands for a sleekit mouse, unsuspecting rabbit, chipmunk or pretty much anything. I watched him, savoring the silence and the beauty of his flight, sorry for him that it was so hard to find food, and thinking of the past month, “Well that was wonderful but I’m glad it’s over,” meaning all the social life I’ve experienced since November 20. The only “chore” (hardly a chore) remaining (so far) is a drawing of the little Episcopal church here in my town.

I felt a little strange last night thinking that the protagonist in my novel, Martin of Gfenn, ends his life with a walk in the fens. “Gfenn” is an archaic Middle German (Swiss) word for wetlands or swamp — fen. When his heart is troubled or he needs to get away from the community, he goes for a walk in the fens. Martin is basically walking in the fens near the leper community as often as he can and looking at the faraway alps as if they were “distant blue and white promises.” I don’t know any writer who doesn’t, in some way, write from his/her life. When I wrote the book, the only fens I had any acquaintance with were THOSE fens, and I believe in medieval times, they were much more “fennish.”

It would be really cool if there IS such a thing as a “collective unconsciousness” from which we draw knowledge we don’t know how we have, people we were in the past, ancestors etc. telling us stories from somewhere and here, in our own lives, we find those things and know they belong to us. I will always wonder HOW I got that story. The absolute insanity and urgency of events that led me there were really like a great hand taking me by the throat and saying, “It’s now or never, Sweet Cheeks.”

After Hamlet talked with his father’s ghost and learned of his uncle’s betrayal, his friend, Horatio, says the meeting is “wondrous strange.” Hamlet answers, “…therefore as a stranger give it welcome. There are more things in heaven and earth, Horatio, than are dreamt of in your philosophy.”

Meanwhile, someone did get to eat out at the Refuge yesterday or night before last. I think a coyote or two managed to get a low-flying duck.