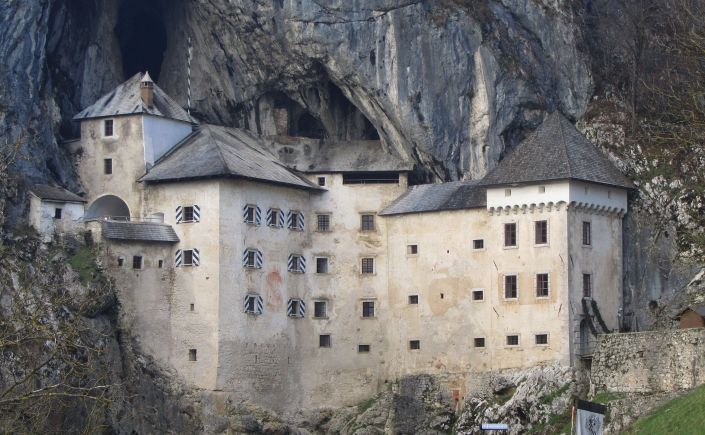 One of the first castles I ever saw was referred to by my friends as Castello Erasmo and it’s in Predjama, Slovenja. The story that brought me there is long and probably incredibly interesting in tabloid news style, but I’m not writing it here (maybe no where). The original structure (long gone) was built in 1274. The castle has since been rebuilt many times. Its protective palisade is the mouth of a cave. The castle butts up against a rock face.

I had not become a Swiss Medievalist Historian yet. It was my first trip to Europe — 1994 — and the trip was fraught, plain and simply fraught, but being born is NEVER easy and being born as an adult into a new life is REALLY not easy.

The guy for whom the castle is named was a robber baron who got into trouble with the Hapsburgs (pretty easy to do, I think, since they were everywhere). Legend has it that he met his demise (always wanted to write that) when he was hit by a cannon ball while sitting on the toilet. The coolest thing about the castle is that there is a way out the back that leads to the top of the cliff, pretty handy in times of siege especially as there was water up there.

“Wow. I didn’t even know Erasmus was in Slovenia.” I remembered reading In Praise of Folly in college. It was an interesting if fairly inaccessible satire for me at 18.

I did not know that Erasmus was a common name back then. In fact, I didn’t know anything. I got home from Europe and found myself reading Erasmus (the famous one, the one who wasn’t a mafioso). I struggled with the Latin (never been one to take the easy or sensible or even POSSIBLE route) then gave up and read the words on the facing page (English). Sigh.

I have a lot of respect for ignorance. THAT benighted journey took me to the Reformation, not Slovenia. OK.

You never know where ignorance will take you — ignorance + curiosity have taken me a lot of places I never imagined I would go. There’s something cool about being a self-taught kind of person, I don’t mean the person who ignores science and believes what they “learn” on Youtube about the Corona virus, I mean the person who wants to find out more about something and does real work, real research to find out. It’s different from school which goes in arbitrary stages — grades, exams, finals, finishes, OK, kid, you got this — but that doesn’t stop. As a teacher I really didn’t think I “taught” anyone anything. I just put the stuff in front of them and showed them something about how to do it and how they would know if they succeeded. I couldn’t “teach” them if they didn’t want to do the work needed to learn it. It was really ON them. At best I showed, facilitated and guided. The best thing I could do — I thought — was inspire in them the desire to learn it, to help them become open to a new experience (writing). Sometimes the magic worked and sometimes it didn’t.

One thing I learned about school in my later years is that it gives you skills you can use your whole life to learn things.

There are other castles built against cliff faces. I wanted to write about a castle like this and found one in Switzerland. I wanted to go see the ruins during one of my trips to Switzerland, but it turned out to be impossible for a lot of reasons — weather, family illness, time… It’s in the Canton of Solothurn, Ruine Balmfluh. It’s built against a cliff in the Jura Mountains.

It’s true what Europeans say about Americans, that we like castles. 🤪 Oh, and the word “palisade?” It is a pretty word, but not such a pretty thing. Some of them were pretty sinister.

8 thoughts on “Just another Mafioso”