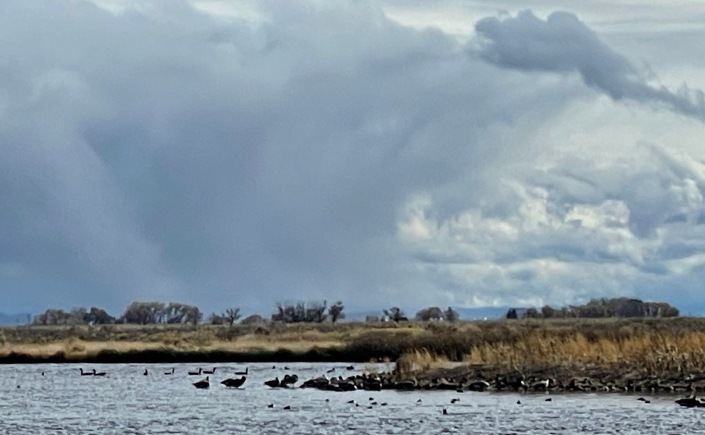 A front came through yesterday and while it only brought us about 10 drops of rain, it was still fun to be out in and to watch. I took out Bear for a walk in the wind (we had plenty of that!). The clouds over the San Juans were dropping snow and moving on and new clouds more snow and moving on — very dramatic and very beautiful. The local ski area was the first to open in Colorado, but this ancient lake bed is between two rain shadows so… There were lots of cranes in the air, none close. No people. It was wonderful to be out there.

We saw a new creature — a little tiger salamander, green from moss, shiny and beautiful. Bear really really wanted that guy, but I stopped her three times. At one point she got loose from my leash and all she did was go to the salamander and look at me. I don’t know about that dog. I guess after six years, she views the leash as part of our relationship which is mildly sad. Still, I didn’t want this to turn into a salamander corpse.

Yesterday I dived into a painting that I’ve wanted to do for a long time. I’m using my new-to-me acrylics and was immediately reminded how different they are from oils and WHY you can actually buy products that slow them down. They dry. Here in this zero humidity world, I have now experienced that to a new degree. I’ve only done two serious paintings (not garden signs) in acrylics since I moved here and they were not the type of paintings I would do with oils. I also did these with a set of liquid acrylics I ended up giving away.

For me, one of the pleasures and challenges of painting is working with a medium, answering to its imperatives, but considering how amazing and large my inheritance of Alex’ acrylics is, I might revise my thinking and get some of that acrylic paint slow down stuff. NEWS FLASH! I have some of this very stuff in my studio!

I’m happy enough with the painting, but I should have approached it differently, and now I’m torn between painting over it and giving it another chance. Rocks are difficult (for me) to paint. Yeah, it’s good they aren’t moving around, but the thing is my strength as an artist has always been motion and, essentially, I prefer painting and drawing people. Strange, huh, considering all these landscapes? The truth is that nothing in nature is static. Even if rocks don’t move, everything around them does which was, I guess, the entire schtick of the Impressionists ‘Capture the light!”

I’ve come to understand my limitations as an artist and one of them is laziness. Back when my brother was relentlessly practicing value drawings, I was bored by it. That’s the kind of thing an artist needs, though; it’s like technic exercises in piano. It doesn’t matter. I am happy to have the challenge even if the greatest part of the challenge is me.

I got a flu shot last week and the flu shot pain went right to the OPPOSITE shoulder from the shot, the shoulder I injured two months ago, and it was like the injury had just happened, incredibly discouraging and painful. I seriously feel pretty whipped right now. Painting and finding salamanders in the Big Empty are good medicine against those feelings.

The featured image is of some geese hanging out on an island in the middle of a large pond. In the sky are several dozen cranes that you can’t see in the photo or hear. 😦 I zoomed in as far as I could just to see what was on the island.