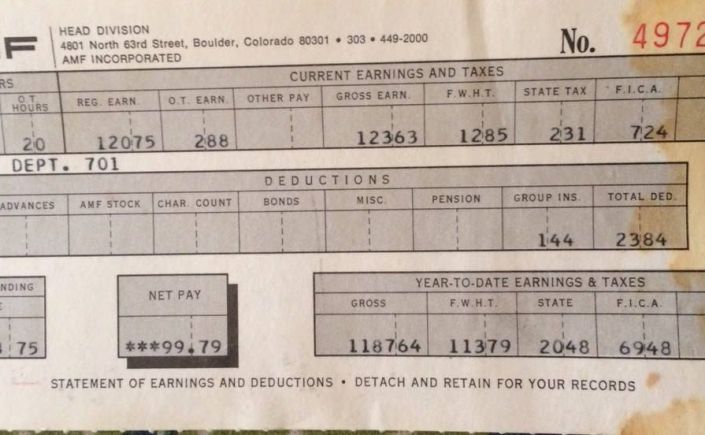 Seven years ago when I was cleaning out “archives” preparing my move back to Colorado from California I found this old pay stub from Head Ski. Most of of the cool stuff I found I photographed and threw out, this too. None of the jobs I did at Head Ski were great jobs. The first (fall 1974) was a factory job, on the line, finishing skis in preparation for the Christmas rush. I wasn’t completely aware of that at the time, but when I was laid off I understood it perfectly. Part of me — now — understanding how things worked and knowing what happened next — part of me wishes I’d never quit Head Ski. I wouldn’t have stayed on the line. When I was called back from lay off I was put in the mail-room, a middle-world between the office and the plant.

This pay stub is from the interval during which I worked in the mail room. I did cool stuff for the company at that point and even met Howard Head who was a charismatic, compelling, optimistic character who liked me. If I’d stayed? My imagination paints all kinds of wonderful things for that alternative reality, but who knows? Maybe back then I felt some sense of foreboding thinking of continuing to work at Head Ski. I don’t remember any such feeling, but??? I do remember thinking that with a B.A. in English, I should be doing something profoundly important.

I don’t see it that way any more.

Not long ago a reader commented on a blog post that we live many lives in our lifetime. This pay stub evokes a whole life, confusion, odd choices, long drives, an undetermined future, a bad marriage.

So what did this paycheck cover? It was a weekly thing. Rent was $140/mo in married students housing at the University of Colorado. Our apartment was by the track, the very track you can see if you watching Downhill Racer in which Head Skis have a cameo role. Five sacks of groceries (paper bags) usually added up to about $25. I figured $5/bag and that was a couple weeks, depending. Laundry? A handful of quarters. In short, this was a normal, lower-middle class pay check, about the same as I make now even though the numbers on my “pay” check look like a bigger number, the same amount in the sense of “real wealth” (as defined by Alan Watts) which is what that paycheck buys.

Summer continues relentlessly. The air has been so smoke-filled that I’m not going outside much. I know sooner or later it’s going to break and fall will arrive and then the good times. Meanwhile, having done my five apple paintings I’ve moved on to a medium I can’t control 100%. It’s a good thing. As I carved away at these bits of linoleum, I thought of when I learned this. I was 15. Most of what I do as an artist I learned in 9th grade. Good or bad? I have no idea. Anyway, the challenges here are mechanical: keeping the tools sharp and not cutting myself. 😀