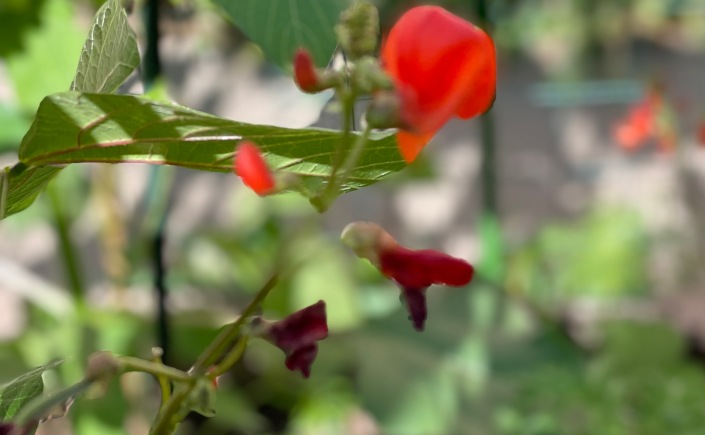 Pearl Buck — one of the three Scarlet Emperor Beans in my garden who survived the spring frost — has lived up to her name. I guess most people who’ve heard of Pearl Buck know The Good Earth but maybe not that she adopted a lot of children or that there’s an organization even now in her name, Pearl S. Buck. She adopted seven children and fostered many, many more. It seems only right that Pearl Buck, the Scarlet Emperor Bean, has more flowers on it than I’ve seen on a bean in my four years of growing them. Pearl Buck was also a very prolific writer. So, not only did Pearl Buck, the Scarlet Emperor Bean, make it through two frosts, but she’s living up to her name in other ways.

I wasn’t self-motivated to learn about Pearl Buck. My thesis advisor, Dr. Richardson, said, when I got home from China, “Why don’t you write a book about Pearl Buck?” It was a good idea. I’ve always been interested in popular literature as opposed to the arty-farty stuff (some of which I like, too). Before I started the project, I hadn’t even read The Good Earth. And Pearl Buck had — this is my assessment based on reading most of what she wrote — never loved anything as much as she loved China. I started reading and writing and, in my old trunk, is a manuscript discussing Pearl S. Buck as part of the Chinese literary tradition. There’s a good case for that, but, really, who cares? It was the first book I ever attempted and most of the time I had no idea what I was doing.

Other people have since written “that” book.

I did have a fancy typewriter that would delete whole sentences if I told it to as well as making corrections. It had a little micro-processor, I think. About two years into that project, when I was living in San Diego near Balboa Park, some guys moved into the apartment above ours (me and the good-X) He was (as was the Good X) a computer guy and he had a Macintosh. “You want to borrow it while I’m in Japan?” he asked one day. “It’ll make your work a lot easier.”

Still, there was no Internet. Old time research was a lot more colorful and less a matter of finding answers. I did my research in the library at San Diego State and at the public library in San Diego where I found everything I wanted in 3-D form, actual old Asia magazines. I had a nice little file box to carry my 3 x 5 cards on which I wrote notes and quotations. It was a serene way to do research with elements of discovery that no longer exist. It’s really NOT the same to “Google” something as it was to sit at a long library table in the late afternoon with a stack of old magazines from WW II. And, then, too, there’s this.

It was from these magazines I learned about WW II, beyond what I was taught in school or the fragmentary stories of my dad and uncles. I learned that the Japanese attempted to conquer China (never learned that in school) and then, in great detail, of the Rape of Nanjing. The magazine was Asia Magazine and its main push was to involve the United States in helping China eject the Japanese. It wasn’t successful, but Pearl Buck and her husband were the owners/editors, and I know from reading through every issue that Pearl Buck was desperate to save the place she viewed as “her” country.

Pearl Buck grew up in China, the daughter of a Presbyterian missionary. There were few trips back to the United States, and China was home. Besides being taught at home by her mother, she had a Chinese tutor. At the time she returned to the United States, she was teaching at Nanjing University.

That she was in the United States at all was the result of a combination of things — but one was the whirlwind of the Japanese invasion of China. Two years after she left, the Japanese would occupy Nanjing in the most horrific way. Pearl Buck wrote graphically about that, an event that may have escaped the notice of most Americans who were struggling with the Great Depression. China must have seemed very far away. Pearl Buck’s impassioned plea for American intervention seems to have been not much more than singing in the wind.

I visited her house in Pennsylvania back in the 1980s. I’d read about her house and how and why it was designed in a certain way, notably that her desk looked out a window onto a Chinese style garden. When I went into her office and looked out the window, I saw what she had done to assuage her life-long homesickness for China. She truly saw “China” through those windows.

She sought a visa to return to China in 1972 after Nixon’s visit, but her attacks on Chairman Mao had made her persona non grata in the PRC. It wasn’t until 1992 that she was “rehabilitated” and allowed to “return”. Of course, by then she was dead, but perhaps the most important part of a writer’s life is the books, the legacy of their ideas, transcribed and shared. You can read about it here: Pearl Buck’s Return to the Good Earth.

But what did she say about writing? That had the longest-lasting effect on me.

“[writing] is a process proceeding from within. It is the heightened activity of every cell of [the writer’s] being, which sweeps not only himself, but all human life about him, in him, in his dreams, into the circle of its activity. From the product of this activity, art is deducted, but not by [the writer]. The process which creates is not the process that deduces the shapes of art. The defining of art…is a secondary not a primary process…for the novelist the only element is human life as he finds it in himself or outside himself.” Pearl S. Buck, Nobel Prize Acceptance Speech