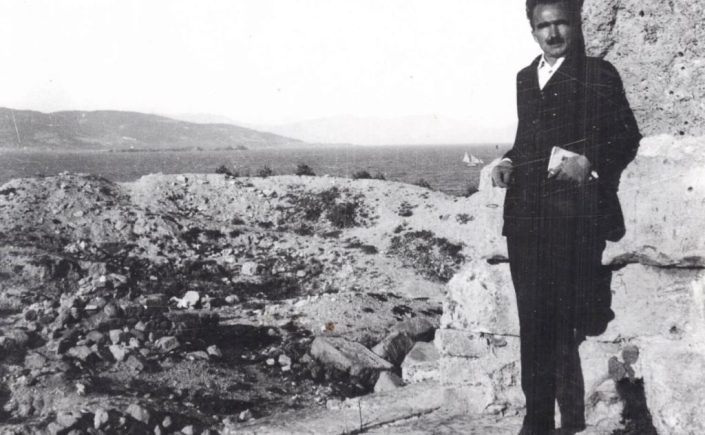 One of my favorite authors when I was younger was Nikos Kazantzakis. He’d probably be a favorite writer now that I’m NOT younger, but I read everything. Yeah, right? It began when I saw Zorba the Greek sometime in 1974 when I’d recently gotten my BA and was (I felt) trapped in a terrible, violent marriage that kept getting smaller and smaller. The lines from the movie (that are also in the book) “You don’t want any trouble? What then DO you want. Life is trouble. To live life, you must undo your belt and look for trouble,” resonated, and informed me. The marriage ended a few years later and I continued reading Kazantzakis. The next line from one of his books comes from The Odyssey, a Modern Sequel. The line (as I remember it but I could be wrong) is, “This is the earth. The bloody arena of men’s souls.”

Recently Amazon told me that there is a film — Kazantzakis — that was recently made. I began watching it last night and it’s brilliant, beautiful, and brought all those books back into the front of my consciousness. The film is a biopic and necessarily rushed to fit into just under 2 hours as Kazantzakis lived through most of the 20th century’s major upheavals and was a literary and political force himself. I like that it focuses on his writing and doesn’t dwell on psychological motivations or things that many biopics of our time seem to, about things no one can even know. Kazantzakis recorded his own life, anyway, so it doesn’t really need to be second-guessed, and these film makers don’t. The film is in Greek with subtitles.

But at one point, after the Nazi occupation of Greece is over, the Kazantzakis character makes a comment about Goethe as having been a hero of the Nazis.

I wanted to know more about that so I spent a little time this morning looking into it. It only makes sense that he would have been, not because of Goethe’s OWN philosophy and ideas, but because it was an aspect of German nationalism at that time to claim to the Nazis every good thing that ever happened in Germany was evidence of a master race.

I didn’t find a whole lot to shed light on this for me, but I found a beautiful essay from 1999 (the year of Goethe’s 250th birthday, which I celebrated!) I want to share with anyone who might be interested. I “met” Goethe in 1998 and he evolved into the best of many “dead” friends I’ve had in my life.

Goethe: Does this legendary literary figure have anything to offer us?

The article says most of what I have to say in response to that question. I don’t think transient politics were a focus of Goethe’s thinking or life. He lived through an invasion of Weimar by the Prussians and the Napoleonic wars. I am not sure what he would have done in Nazi Germany, but I do know that he wasn’t there. I’m going to keep looking into this question, but I agree with the author: “…everyone is aware of the canonical status Goethe’s work enjoyed during the Nazi period. This tells us more about cultural manipulation than it does about him…”

I thought it was cool that two of my very favorite writers at least met in this casual way in this lovely film.