One of the amazing things about color is that it doesn’t even really exist. What we see is the way light is reflected from a surface. Light is the thing.

I don’t remember a time when I wasn’t fascinated by color and when some science fair (fifth grade?) came around, my dad decided it was time for me to learn the difference between color in light and color in pigment.

Back when I was a kid my dad loved a particular catalog. It wasn’t very interesting for a kid to look through. It was mostly words and black and white drawings. I think it was the Edmunds Scientific Catalog.

He ordered red, green and blue transparent colored gelatin slides like those used in theaters, and we set about making a project with them. I was HIGHLY skeptical that three colors could equal NO color (how I viewed white at the time) but my dad said it would. He also said red and green would make yellow. Huh? I’d already learned THAT made brown!!!

“There is no brown in light, MAK.”

Right dad. Whether he was telling me the truth or not remained to be seen (ha ha).

We made a black box out of some boxes (the cardboard box is the foundation of much childhood architecture) set up the slide projector so there was a bright light we could shine through the colored slides. When I saw it with my own eyes, I was amazed.

“This is the science of optics, MAK.”

He’d also ordered some prisms so I could see that the angle at which light hit the prism made rainbows. My display was going to show all these mutations of color including a demonstration of mixing paint. It had a big sign that said, “Optics.” Well, it was my new word…

As you might expect the display we put together wasn’t very fancy. “It’s what it DOES that matters!” was my dad’s philosophy all the time about everything. It was also very technical. It wasn’t something you could just stop and look and go, “Wow, that’s cool. That kid is smart.” It involved demonstrating things. There was only ONE demonstration time in the fair and I had WAY too much to demonstrate.

Dad and I were also ahead of ourselves all the time. Enthusiasm pushed us to want to say EVERYTHING. Thinking about it now, I think the project probably needed an hour of class time, not a ten minute demonstration by a kid. A cardboard box, masking taped together, and painted black with tempera paint is not very inviting even with a couple of slabs of glass sitting in front of it.

No one even stopped to see except the judges who just wrote their checkmarks on the mimeographed papers on their clipboards, veni, vedi, vinci or something. It was disappointing, but as you might expect at this moment in my story, the important thing was doing the project with my dad — and what he taught me.

An Alphabet of Place 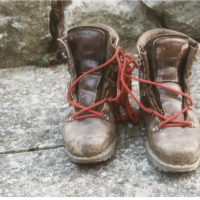