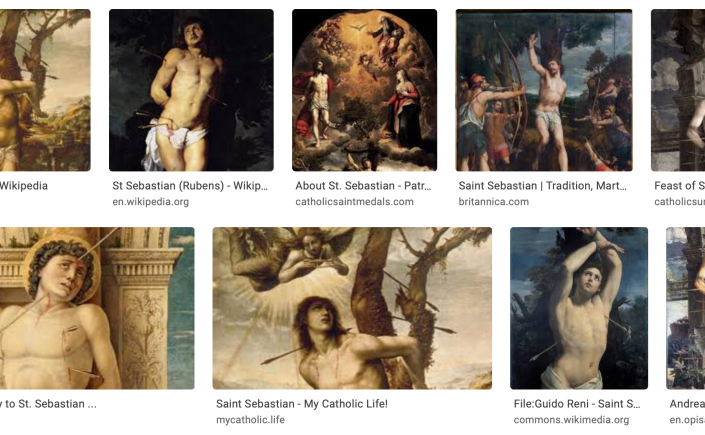 “Don’t be such a martyr.” I used to hear that around my house a LOT. I got the impression that a martyr was a person who sacrificed his/her own interests for the interests of others, and then wanted accolades for doing that, basically, a blue ribbon for cooperation. As time passed, it took on another meaning which was a person who would give up what they wanted for the well-being of others, BUT then wore a veil of suffering and sacrifice the whole time. Not a lot of difference between those two explanations; it’s more a matter of nuance and motive. That’s how martyrdom played out in my family.

Then I became immersed in the Middle Ages and learned what martyrdom meant to those people. It was a carrot on a stick. It appears that self-sacrificing actions — even small ones — need to be rewarded. Lives of the Saints is full of the stories of martyrs, naturally. Martyrdom is a short road to sainthood and dying for the Holy Cross was the one sure road to Heaven. But not all of the actions of saints required the ultimate sacrifice. Sometimes it was just about giving your coat to a poor man on the road or kissing a leper — simply an appeal to people to be kind to others. It seems people have always needed an incentive for that.

In Milan 20 years ago, before 9/11 when a lot of the art was put away for safety, I was able to wander around the Castello Sforza for days. There were paintings of martyrs. I was able to see the changes in the rendition of the lives of the early Christian martyrs, and, more importantly, their death. St. Sebastian was, to me, the most surreal. In some paintings his arrow-pierced body stood calmly with total equanimity and little blood flow as if every day of his life, Sebastian went out, got shot with numerous arrows, and then went home for dinner. The point of that — I though later — was to give the sense that sacrificing the earthly life for a Heavenly life was no big deal and people shouldn’t resist the opportunity.

An important thing about the early Christians who became martyrs is they didn’t sacrifice their lives in order to get recognition for their suffering or even to get into Heaven. They ended up martyrs out of their sense of conviction. There were 1200 years between St. Sebastian’s day with arrows and the paintings of him.

The early Christian martyrs became propaganda tools. The future — the Middle Ages — used them to turn people into willing martyrs. Any young man who died on Crusade was guaranteed salvation. This is the same idea behind Islamic death cults that, in our lifetimes, have turned young men into bombs, or, in WW II, turned some Japanese pilots into Kamikaze fighters, ready to die for the emperor — the idea that there is glory in death and great rewards beyond.

I could probably write about this all day, but, sigh, I must shoulder my burden and go pick up dog shit.

P.S. In looking for the image of St. Sebastian I wanted for this post, I found this article.

Worried about the Coronavirus? Pray to St. Sebastian Apparently he was the saint to which people prayed during the great plague of the 14th century which killed at least 30% of the population of Europe. I can see that. The plague buboes would have looked like arrow piercings in a way. But I’m not sure about our plague…