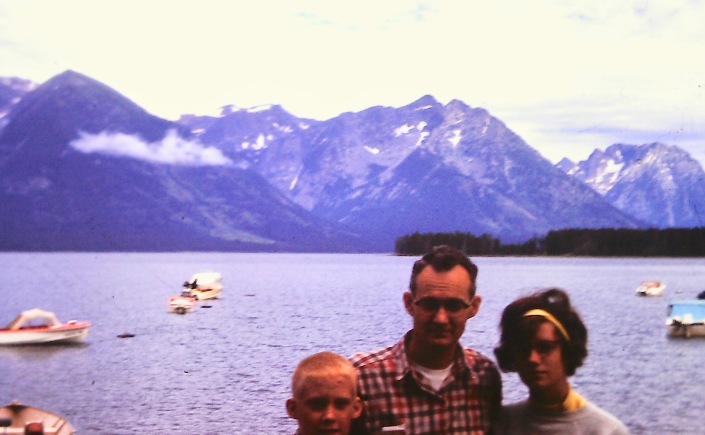 My cousin Greg was along with us on his way to his freshman year at the University of Chicago. We lived in Nebraska, part way there from Greg’s home in Billings, Montana. From Omaha, Greg would go on to Chicago. The plan was that he would help my dad, who was not getting around that well and tired easily because his MS had decided to get real. Greg could drive.

We’d just had a long, and for my dad tiring, vacation that included visiting family in Billings and Denver, a week in Yellowstone and the Tetons, a short visit to the Black Hills and Devil’s Tower on the way from Nebraska to Billings. I didn’t know it then, but it was my dad’s Beautiful Spots in Nature Swan Song.

“You never know what the government is going to do with those lists. You might think you’re joining a club and your name lands on some list in DC and you end up in jail.” My dad was very serious.

I was there for these conversations, but I didn’t understand them completely. I was 12 or so. Now I know my dad was referring to Joe McCarthy’s blacklists. My dad was afraid Greg’s whole life would be blown away because of a club he naively joined his freshman year in college.

My dad had grown to real adulthood during the Red Scare. While he truly hated Totalitarian Communism, even more than that he hated “the thought police” and believed fervently in individual rights. My dad was absurdly intelligent, definitely not a mainstream guy. “They” in my dad’s mind, were the “conformists,” who would try to make everyone the same. He loved Ayn Rand’s novels and I think he would have found the political party that has grown around them to be oxymoronic. My dad’s biggest fear for Greg was that he would end up on a list and lose his personal freedom.

Greg had never really been out of Billings, Montana. I imagine my dad also thought Greg might need extra preparation for the big city. Greg majored in theater which was part of my dad’s concern. So many Hollywood actors, directors, etc. had been persecuted during the McCarthy Witch Trials.

That November, when Greg came to us for Thanksgiving, he walked with me to junior high. We walked through the forest. When I came home the same way, I found Greg at the opening to the forest. He wanted to walk me home through the golden and red deciduous woods. It was 1964 and Greg told me that he was attracted to men. He asked me not to tell anyone. I told him I might tell my dad. As I remember it, Greg shrugged. Maybe he understood that I didn’t fully understand what he’d told me. Maybe he trusted my dad. All my dad said when I told him was, “I’m sorry to hear that. That’s going to make Greg’s life a lot more difficult.”

We got back to my house. Greg sat down at the piano and played — and sang — “I am a Pirate King” from Gilbert and Sullivan’s Pirates of Penzance in which he’d been cast. It was great.

I didn’t see Greg again until he was in his fifties! We were at his mom’s house. The aunts were arguing about what they’d do if they had a million dollars. Greg showed me a book that had belonged to my grandfather, the essays of Thomas Carlyle. We talked about everything, then, to escape the noise, went outside into the snowy pasture. I took him to the back of the pasture where a local vet had built an immense “cage” to rehab raptors that had been injured one way or another. He died when he was 56.

I have thought often in recent months about what Goethe said, something to the effect that our lives depend on luck, specifically where, when and to whom we are born and at what point in the stream of history. That was Goethe’s response to the idea that our lives are motivated by a divine design. In OUR moment we have a lot of advantages that people born even, well, when I was born didn’t have. I got the measles and the mumps because there were no vaccines for them back in the 50s. My dad’s moment had (among other things) the McCarthy trials and the specter of the mind police looming over it. My cousin Greg’s moment considered his sexual impulse a crime.