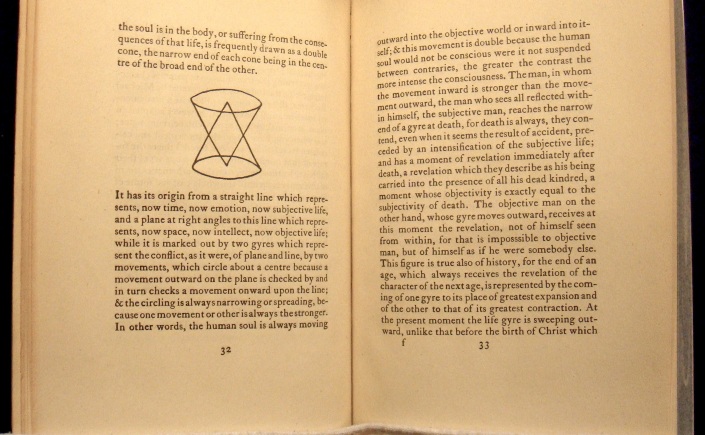 As an undergraduate, I met William Butler Yeats, the great Irish poet, in a summer class, Critical Writing, a required class for English majors. I was in summer school to expunge an F in that class I had won honorably in a joust with a fascist, sexist POS professor. In that summer class we were tasked to write five different five-page essays on ONE poem by Yeats. A long poem, which was a little helpful, but it was still a challenge. I chose “The Double Vision of Michael Robartes.”

My professor was of the school that believed in direct reading of poetry, not historical analysis, so we read the poems without reading criticism or extraneous analysis. I didn’t know (and didn’t learn, at that time) anything about the background of the poem. I just read it and wrote about it. A LOT. I ended up LOVING Yeats, so when the option appeared a few years later when I was in graduate school to take a seminar in Yeats, I signed up.

Yeats kind of lost me when, in his poetic career, he and his wife, George (Georgie) began exploring the “occult” side of life, going into trances and doing “automatic writing,” a thing where the spirits come and direct the pen of the person holding it who simply surrenders to what the spirits have written and later gets to read and decode it. Ultimately there were 4000 pages of this done by Yeats and his wife. Many of these poems are “told” or “seen” by a character, Michael Robartes — Yeats but not Yeats.

All this occult stuff led to a few books and more poems based on something that Yeats and his wife saw as a “system” that explained the rise and fall of human culture throughout history. Two gyres — dynamic spirals — spinning in opposite directions. In a general sense, one of the gyres is the culture building, the other is the culture declining.

Many of Yeats’ later poems center on this idea. It turned out the poem about which I wrote five essays (“The Double Vision of Michael Robartes”) “depends” on understanding Yeats’ vision to be completely comprehended. OH WELL.

I don’t buy that. Yeats was a good enough poet that meaning shines through many of these “visionary” poems even without knowing anything about A Vision. Probably the most famous and well-known of these poems is “The Second Coming.” The gyre appears in this immediately:

Turning and turning in the widening gyre
The falcon cannot hear the falconer;
Things fall apart; the centre cannot hold;
Mere anarchy is loosed upon the world,
The blood-dimmed tide is loosed, and everywhere
The ceremony of innocence is drowned;
The best lack all conviction, while the worst
Are full of passionate intensity.

He’s describing the decay of a world. When the gyre reaches its widest part, it vanishes. “This figure is true also of history, for the end of an age, which always receives the revelation of the character of the next age, is represented by the coming of one gyre to its place of greatest expansion and of the other to that of its greatest contraction.” Michael Robartes and the Dancer

Only the work of artists and scholars remain from a world when it has reached its fullest point on the gyre and vanishes. Art and scholarship are coded messages from one age to the next.

“Once out of nature I shall never take
My bodily form from any natural thing,
But such a form as Grecian goldsmiths make,
Of hammered gold and gold enamelling
To keep a drowsy emperor awake;
Or set upon a golden bough to sing
To lords and ladies of Byzantium
Of what is past, or passing, or to come.”

6 thoughts on “Gyres, Spirals and Poetry, Oh My!”