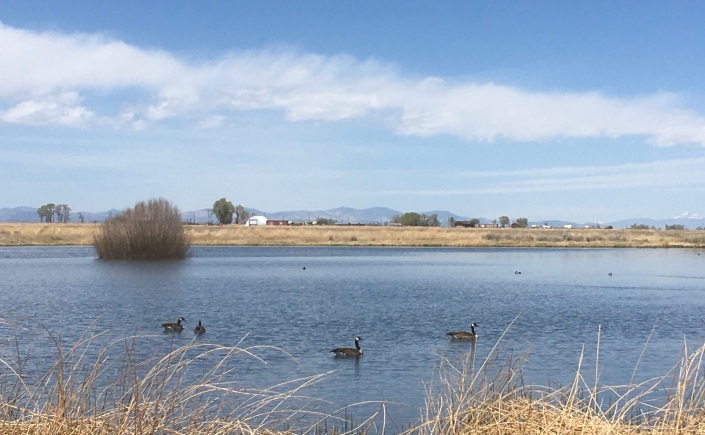 Teddy and I headed out for the Refuge because it’s a cool, sunny day. You still can’t see much “spring” out there, though the five or six trees are leafing out. I was mildly (I think they know what they’re doing) concerned about “my” geese having vanished, but no, they’re still there and it would seem they have nests. They fascinate Teddy. He really DOES believe they are his job. I got to watch a red-tail hawk for a long time. Antics like that really mess with my miles per hour stats.

We really prefer going out at midday which is great 3 out of the 4 seasons, but not necessarily in summer…

When I got home, it was Christmas. There was an immense City of Monte Vista truck in my alley and two guys with chain saws cutting down the monster lilac hedge that lines my yard and the alley. I went over to talk to them and said, “Is this Christmas?” That hedge is a huge pain for me every year. I’m out there cutting it back from the alley with hand tools. It’s very hard work. Then there’s the problem of having the branches hauled away.

The two young guys with the 24 inch chain saws laughed and then kept cutting. Later I went out and saw two older guys with a huge tractor with a front shovel. They were picking up the branches and taking them to a truck parked on the street by the golf course.

–
Lilacs are beautiful and smell amazing, but once that’s over they are a menace to life on this planet. They REALLY like it here, too. It’s hard to tell them from weeds. They send their shoots out hoping to colonize the entire San Luis Valley starting with my yard…

Anyway, things are fine at the Refuge. We welcomed a car propelled by a grandpa with a kid in the back. More action than we’ve seen there in weeks. It was a little strange.

In plant news, the pumpkins are blooming which I think is very ill advised. The cherry tomatoes are growing and the Roma tomatoes are germinating. The Scarlet Emperor Beans are reaching sublimely to the sun. I’m going to have to plant this stuff soon.

Since, yesterday, I shared a poem by Tu Fu (for whom one of the beans is named), I’ll share a poem now by his good friend, Li Bai for whom another of the beans is named. These two friends were often separated by hundreds of miles and corresponded in poems. It’s one of my all time favorite poems and the partner to the poem I posted yesterday. Tomorrow I’ll share a poem by Li Ho, the last of the beans. He’s a little different and the poem I will share is my #1 favorite poem. 🙂

The birds have vanished down the sky.
Now the last cloud drains away.

I can’t bear a journey to the village–
I’m too contented here
I call my son to close the wooden gate.

Thick wine drunk in quiet woods, green moss,
jade gray water under April winds–
and beyond, the simmering dusk of the wild.

10 thoughts on “Christmas in May”