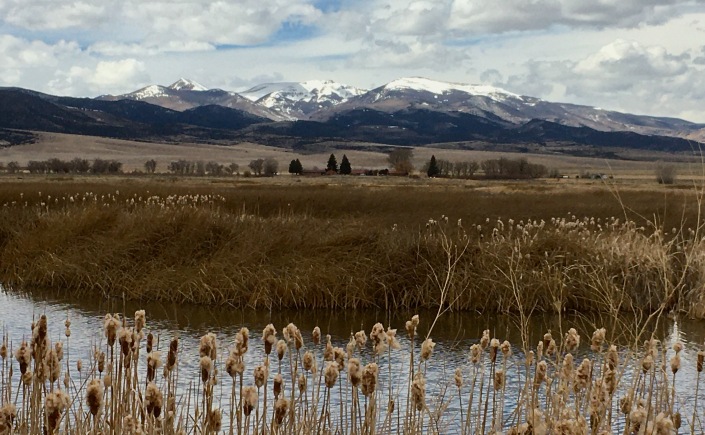 Bear and I went out to the Refuge, and there was NO one to welcome meaning we had THOUSANDS of acres in which to practice social distancing.

We parked in a different spot because I was hoping to be able to get closer to the cranes, but that wasn’t possible. At first I thought the cranes had taken off but no. They were just staying on the ground. Out where they were hanging out, it was pretty windy. Wonderful walk.

Bear made the point that getting all jazzed up over a feather is really silly when there is copious crane poop everywhere. I told her it was a matter of perspective, and I don’t share hers. She attempted to change my mind with the argument that there’s more poop than feathers, and I just said, “Always the same story, Bear.”

We stood and watched the cranes for a while. They are just hanging out, having fun and staying out of the wind. They’re dancing and it seemed to me their dance ripples through the line sort of like “the wave” at a ball game. According to American Bird Conservancy, Sandhill Crane dancing, “… is thought to strengthen the bond between pairs and may also reduce aggression between birds.”

I think they dance for joy. Here’s my evidence… OK it’s sketchy but the significance of joy is beautifully expressed here by Edward Abbey in Desert Solitaire. I’ve photographed my actual book from which I used to teach Critical Thinking and Nature Writing. Along with the cranes I hear frogs, geese, ducks and all manner of birds… Spring… Abbey is writing about why the frogs in vernal pools sing. He gives a theory I can definitely get behind…

When the cranes head out — soon, I imagine — most will stop somewhere along the Snake River in Wyoming/Idaho but some of these very birds go all the way to Siberia! How do they decide who’s going where?

As I walked along with this wonderful dog I thought I should take up bird-watching which would mean the major change to my life of remembering to carry binoculars.

Speaking of which, I’ve been trying to find movies that don’t involve “luv” or crises or anything annoying (go ahead, YOU try it) and so far I’ve (re)watched Second Hand Lion and The Big Year. OK The Big Year has a LITTLE luv in it, but the focus is a competition between three guys to see the most birds in one year and thereby win “the big year.” In one scene they’re in Whitefish, MT and hear Sandhill Cranes. I don’t know why that scene isn’t a LOT longer… 😉

Also on my list are Local Hero, The Big Lebowski and Genius. If you have any suggestions please comment. I’m looking for movies that are not romantic comedies and are not focused on overcoming some terrible adversity. It’s part of my stragedy for getting through this thing day-by-day, succeeding in that “one foot in front of the other” thing that is, ultimately, life. Sadly, I know all the Monty Python movies by heart… 😦

Our caper this afternoon, in total solitude, out there in that beautiful place with the wide trails and changing light? Wow. Ducks are nesting in the cattails beside the ponds. Geese are fiercely marking off territory in their watery world. Red-winged blackbirds screech, wrens, blue birds and, in the distance a raptor — golden eagle, I think — dove for something on the ground. Successfully, apparently. I watched for a long time and didn’t see him come up again. I pictured him shredding something there in the golden grass.

Other beautiful things? A field of cut grass, blue mountains in the distance and hundreds of black cattle scattered throughout. Gorgeous. A big white dog leaning against a pile of hay while his cows feed from a couple of bright orange troughs. A lone green tractor waiting to go to work tomorrow, behind it blue foothills and a snowy peak. A tired mom and her two VERY tiny (smaller than Bear) newborn calves. Every day, at least once, I thank EVERYTHING for bringing me here. I still can’t believe my luck. It’s my gold watch, my “thank you, good and faithful servant.” ❤