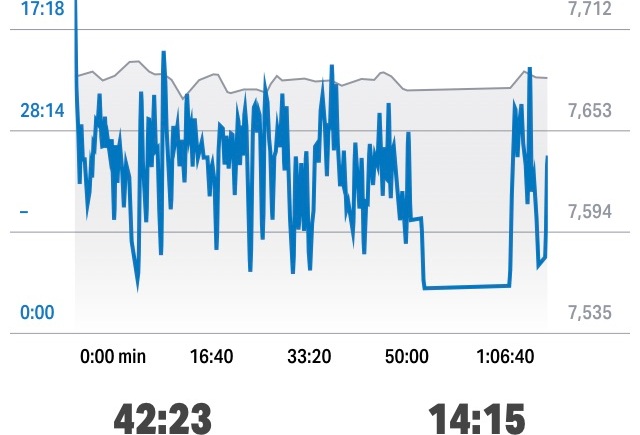 I don’t know when I realized that I had no idea what was going on. For a long time I thought I had a pretty good bead on reality, but I was wrong. And THAT is the entire thing right there. My perceptions are clouded all the time by my mood, my expectations, whatever biases under which I’m laboring. I now know I have no clue. Discerning “What’s real?” isn’t always easy.

Yesterday I walked Bear on the golf course and beyond. It was a beautiful day if you like spring (I don’t especially).

There was a guy playing golf. He seemed to be driving his car to the holes and then hitting the ball. I always feel for those guys trying to play golf in the winter. The ground is still frozen in most places, the grass is flat and dry. There are still large patches of old, old, old, snow. Those golfers are like me wanting to walk my dogs on the golf course in the summer when the course is open.

So as not to bother the guy, Bear and I turned away from the course. I waved at him and he tipped his hat (?!). I noticed that a woman was driving his car, and when I passed the car, I waved. She rolled down the window and said, “You are so beautiful with that glorious hair and that beautiful dog.”

I said, “Do you want to meet her? She loves people.” The woman got out. She was about my age. She asked Bear’s name and when I told her she said, “No way.” I thought that was because every second big dog is named “Bear.” She said, “See what’s on my husband’s club?

I looked over at him. He was playing a nearby hole. One of the clubs in his bag was covered with a plush polar bear. I told her that “Polar Bear” is Bear’s whole name. The woman said she thought it was a sign, and she said she needed one. I wondered why, but it wasn’t my business, really, and if Bear and I were a sign, it’d be best if we were just THERE being a sign. She was incredibly interesting to talk to. I liked her.

Bear was her usual sweet self as the woman and I talked and it turned out that the woman was from Colorado Springs. I told her I’d gone to high school there. She asked what school and when I told her she laughed. She’d gone to the high school closest to mine, Wasson. She graduated two years ahead of me. She’d lived on Condor, in “Bird town.” That’s a row of streets near her high school, all of which are named for birds, Oriole, Goldfinch, Condor, etc. For the first year after my parents moved to Colorado Springs, I’d lived in that neighborhood, too, though not in the bird streets. It IS a small world.

We visited for a long time. She and her husband live in Del Norte. Yesterday was his first time attempting golf in 25 years.

(The featured photo is my “workout” app. I’m trying to walk faster and the app is helpful. Bear and I covered 1.6 miles. I couldn’t stay out too long because I had a social thing later yesterday afternoon. You can see the conversation between the woman and I in the long flat-line. The deep troughs are Bear rolling in the patches of snow that still remain or me looking off at the distant mountains and sky. We’ll ever be running races — we go out to get distracted, I think. The numbers on the bottom are average speed [43 minute/mile] and fastest speed [14 minutes/mile])