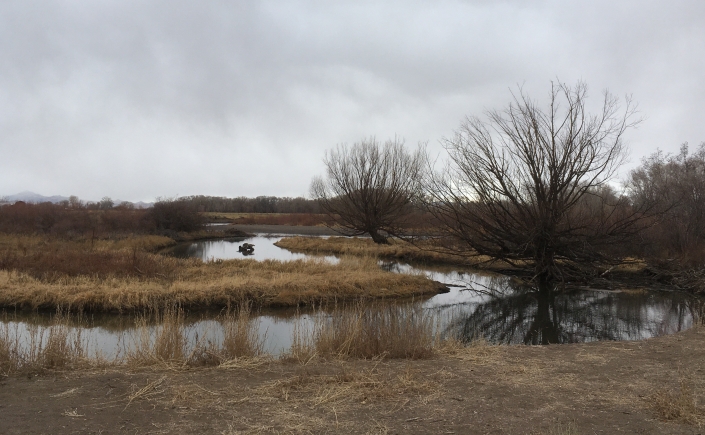 Here’s what I came up with for the museum about my mom’s moccasins. They are made of deer hide, not thick and not warm, kind of like leather gloves for the feet, but (and I’ve worn them) very comfortable. 🙂

These beautiful moccasins with wild rose beadwork were made for Helen Tibbs Beall when she was teaching at the elementary school in Crow Agency, in South Central Montana, not far from Little Bighorn Battlefield National Monument. The woman who made them was Florence Real-Bird, the mother of one of Helen’s students and Helen’s friend..

Helen was born on a farm near Hardin, Montana in 1920. She had nine siblings, three brothers and six sisters. She was the eighth child of Sherman Beall and Emma Harriet Tibbs who settled in Belfry, Montana in 1914. Helen was baptized in the Little Bighorn River by Reverend Chester A. (Chet) Bentley who spent most of his life as a minister to the Crow Indians at the Crow Baptist Mission.

Her first school was Warman School, a one room school on Warman Creek between Crow Agency and Fort Smith. Helen ended her teaching duties on the Crow Reservation at the elementary school at Crow Agency. She graduated with her teaching credential in 1947.

Soon after marrying, Helen and her husband, William B. Kennedy, moved to Denver where Bill attended the University of Denver, earning a Masters Degree in Mathematics. Helen continued to teach in the Englewood, Colorado school district until the birth of her daughter in 1952.

My injured foot is a lot better, but not quite well. I injured it on September 20, but reinjured it on October 24 so I don’t know exactly if I should be measuring its recovering from September or October, but I guess it’s really up to my foot… I’m still wearing a brace, still using a cane when I walk the dogs, still walking awkwardly, but it doesn’t hurt unless I stand on it too long, and even then it’s not the searing pain it was at the beginning.

Bear and Teddy have adjusted to not getting daily walks. I think that’s a good thing. Bear and I have been out a few times — last time to Shriver/Wright on a blustery gray perfect November day. We both had a wonderful time. From Bear’s perspective there were a lot of new and fascinating things to smell. From my perspective the snow flurries and cold breeze were refreshing. We were happy to be out there together. I learned my lesson about walking them together, for now… Mostly they play in the yard like two hellions — Teddy essentially FLIES when he starts chasing Bear around. Bear doesn’t move much at all. She just lets him go nuts then ambushes him when she feels like it. They like to roughhouse in the living room and I should mind, but I don’t. I just clean it every day…

That’s the news from the Back of Beyond for Tuesday, November 26, 2019

28 thoughts on “…The Moccasins and Other Things”