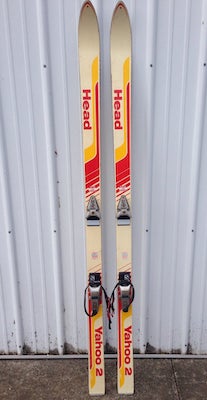 My main regret in life is that I didn’t stay at Head Ski back in 1975.

It started like this. I got my BA in English in the summer of 1974. I had to find a job tout suite. I was married (it was a very very very bad marriage), he was still a student and part of our income had been my government grant from my Dad’s GI Bill, awarded to children of disabled veterans. I went to the local paper and got turned down (didn’t type fast enough). I went everywhere. Then there was an ad in the Daily Camera saying Head Ski (then headquartered out on Valmont Road) was hiring line workers. I went and applied. I started the next day which was lucky as we’d just been turned down for food stamps. It was work on the ski production line leading up to Christmas.

For a month or so I cleaned and painted the sides of Head Skis. This involved Naptha, black paint, and pumice to get the rust off of the metal edges. I worked swing shift (which I ended up liking). I had a partner across the table from me, a tall, bosomy blond my age (22) who was contemplating cheating on her husband. We talked a lot about infidelity during those evenings. I’d already cheated on mine, but, in fact, he deserved it. Still and all, I didn’t want to do it again. It hadn’t helped or solved anything. It just made it worse. I should have left, but…

Turned out I have a great work ethic and this was observed by the floor manager. He promoted me to burning serial numbers on the edges of skis, measuring their flex and putting them in net bags for shipping. That’s a pretty responsible job. It was less smelly than the job cleaning the edges and some of my co-workers wondered why I got the promotion and not them. Life on the factory floor is kind of weird. The job I really wanted was silk-screening the Head logo on the bottoms of the skis. I envied that guy.

Head had gone from the classic all black, all blue, or all red ski (on which Jean Claude Killy skied ❤ ) with the small, tasteful “HEAD” on the toe to brightly colored skis with the word “HEAD” part of the design. The Yahoo (featured image) was the new ski, and it was shorter than other skis with a deeper side cut.

Howard Head was a ski innovator, designing the first commercially successful aluminum laminate skis. He was also a really nice guy. Anyway, the skis we were making were beautiful and I didn’t think I would ever, in my life, afford a pair. I had a pair of Harts I’d bought with my first $100 from working two years at the A&W in Colorado Springs in high school…

Around Thanksgiving we got the skis all done. Although I didn’t notice (numbering, measuring and bagging skis is a solitary job), some of my co-workers had already been laid off. I wasn’t even aware I had a seasonal job, so being oblivious and alone had advantages. We were moved over to filing the throats of Head Tennis Rackets, a supernally boring job for which we all got high in the parking lot. Weed back then was cheap Mexi so don’t go all thinking we were having some wild drug experience. All it did was slow down time and make us care less about being bored. It made us better at filing the tennis rackets, though. In that state, one could become actually INTERESTED in the throat of a tennis racket.

Then…we all got laid off. We were told at “lunch” (8 pm). “Thanks for your work, Head Ski really appreciates it. You’ll find your final pay in your locker.” As soon as we need workers, you will be the first we call back.” Of course we were all angry and went out to smoke weed and resolved not to file many tennis racket throats when we got back. Down with the man. Screw the system…

I quickly found a Christmas job at a toy store.

Fast forward many incredibly interesting stories to the January day I got the phone call, “We’d like to hire you back to work in the mail room.”

I was so young, so ignorant, I didn’t realized that I’d been lifted out of the plant and placed in the office. Everyone’s dream. It wasn’t a dream, though. It was real, and life in the mail room was bizarre — that’s another post for another day. Over time, I caught the eye of Howard Head. What happened was I rebuilt a table top offset printer I found in the mailroom and got it running so we didn’t have to send memo head and other internal stationary out to be printed, saving the company money. Mr. Head called me in, gave me a bonus check and dinner in a fancy restaurant on the company.

I was tried out in a couple of departments offices and the plan was I would “float” where help was needed until I found my niche. I worked in cost accounting and marketing. Things were going well in Marketing. I did a painting that the company used as a poster (you could see it on Mork and Mindy in Mindy’s house, on her wall). I liked it and the marketing team liked me. Then…

The plant went on strike. My friends from the old days were on strike. Most of us in the office went back to the plant to keep production going. We did finish work, the last stuff to get the product out there. I wrapped leather grips on tennis racket handles…

After a few weeks of crossing the picket lines (all that happened to me was my friends shouted out, “Hey Martha! How’s it going? You wanna’ grab a beer some time?”) I decided I was too smart to work at Head Ski. After all, I had a BA in English (never mind I’d been thrown out of one school and graduated, ultimately, with a humble 2.7 though a 3.9 in my major), I was the intellectual god, and I needed to go to grad school (from which I was more or less ejected, though given the option to go ahead and write my thesis, if I was able to write it, which all but my thesis advisor doubted).

It wasn’t until I was living in San Diego, was 35, and a student from Geneva said, “I live for ski” that I realized that was my story, too. It wasn’t until I moved back to Colorado five years ago that I properly appreciated that fateful decision to return to school. Maybe it took forty years for me to know myself (possible). If I’d stayed at Head Ski I’d have had free skis for life and possibly traveled the world doing marketing for the company.

It’s kind of weird how things turn out. The best and most consistent teaching job in my career was teaching business communication at the university level, not literature, not poetry, not writing, but business communication. Maybe we should say to kids, “Not all smart people are academics, sweet cheeks. Follow your bliss. You don’t know what that is? Give yourself some time. Believe it when you find it. Pay attention to the people around you. If you are encouraged, accepted and respected, you might be home.”