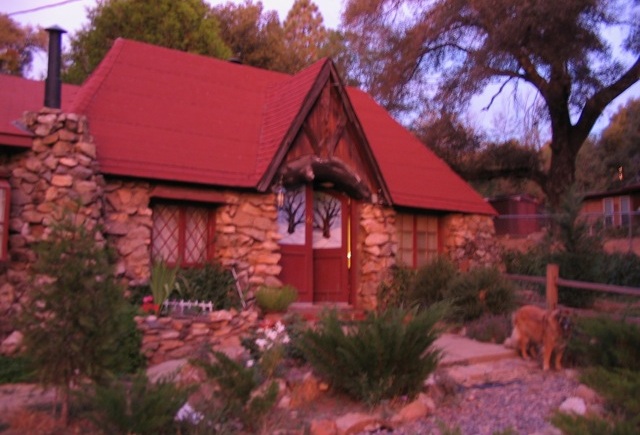 Tony the Tree Man was an East County Character (there were a lot of those in the remote wilds of San Diego County maybe I was one…). Tony was the best (and only) local tree-trimming guy with a boom truck.

Tony the Tree Man was a local legend.

Years of drought had led to major infestations of bark beetles that killed the indigenous oak trees. Old trees were particularly susceptible and some of them were very tall.

I had a 100 foot dead black oak in front of my Little Stone House in Descanso and as time wore on it was clear to me that sucker could easily fall on my house in one of the 70 mph windstorms that came with Santa Anas. One day I noticed a business card stuck in the chain link fence.

“Tony the Tree Man for all your tree needs. Tell your wife. I’ll trim her bush.”

Yes. How could I NOT hire a weirdo like that? I took the card and called him. Tony showed up to meet me and bid the job. He handed me a magnet for the fridge with the same offer to trim the bush. He looked at the job and said, “I dunno. $300?” An incredibly low bid, but there was more. “And I keep the wood?” Ah. That’s where the big money was in East San Diego County. In firewood. I paid upwards of $500/cord and burned through two cords every winter. Sometimes three if winter were long and spring was wet. There were easily five cords in that tree.

“Have you seen my scar. I was in a MF of a motorcycle accident,” and he proceeded to show me a grizzly scar that went from his groin to his ankle. I’d been warned so I just shuddered respectfully and ignored the divestiture of clothing that accompanied the revelation of the scar. “Amazing you lived,” I said.

He showed up a few days later with a decrepit boom truck and his assistant. A deaf Mexican.

Since Tony’s language was liberally sprinkled with non-obscenities it was probably for the best that his assistant couldn’t hear him, still, I’d think a tree man would need an assistant who could hear, “HELP!” Maybe the Mexican could hear a little something, but the thing is, the Mexican spoke no English and Tony spoke no Spanish.

They leveled the boom truck. Tony was lifted to the top of the tree. He climbed out of the basket and onto the tree, strapping himself around the tree with a leather lineman’s belt. The tricky part was getting the top cut off so he could safely just cut down the tree.

The boom truck roared. The basket he had abandoned was Tony’s only safety “net.” He hoisted his immense chain saw and started to work on the skinny branches surrounding the top, then, he started in earnest on the trunk — above his head. It was so reckless, so scary that it was hard to watch, but the Mexican had to. At one point he whispered “cojones,” and for a split second I felt I was in a Hemingway novel, but that didn’t last long. Tony sawed and cursed and sawed and cursed, and I went inside. If he were going to split his head open and die, I didn’t want to witness it.

Then came a moment when the chain saw stopped. There was a second or two of silence. “Oh my god,” I thought, my heart pounding. Then…

I went out and Tony stood on a couple branches, leaning backward on his lineman’s belt, his massive chainsaw thrust into the air, singing with all his heart.

Featured image: My little stone house in Descanso, CA. There’s a similar tree in the background. The dog in front is Lupo. 2004 ❤