The Great Plains of America is where storms go to party. They are experiencing a horrific blizzard right now. It’s not just storms in Winter, though. All year… Well, fall is a little calmer.

Years ago, in the 80s, my mom, my ex and I drove from Billings, MT, through the Black Hills of South Dakota — wait, I drove — down the winding mountain roads from Deadwood to Hot Springs. Pitch black night, raging storm, no visibility, mom in the back seat and even Jim, now the Ex, a passionate backseat driver, was quiet. From time to time I’d slide slowly around a hairpin turn and the headlights would hit the glowing eyes of creatures in the trees. Deer? “Stay in the woods,” I said to them speaking the silent language of terrified drivers. Once out of the hills, we’d cross the big expanse of grassland where the buffalo roam. “Good God,” I thought, “stay off the road.” The rain fell in buckets with spats of intermittent hail, and I kept going. We had a motel in Chadron and had to be there by 9 o’clock, but we’d be late. No way to make good time through this. We hoped they’d understand that and save our rooms.

Finally. The storm slowed down and stopped. The road flattened around Hot Springs and I hit the gas. In the distance a couple sheriff’s cars flashed red lights. My California experience said, “Go around them” but when I did, I was chased down.

“What does a red light mean?” asked the sheriff.

“It means stop. You come through the Black Hills?”

“Well slow down. The road is flooded all along here to Chadron.”

The motel in Chadron had given away our rooms, but they were nice enough to phone a motel on the Pine Ridge reservation. We headed back up the road we came, checked in and went to sleep.

When morning came, we went to Chadron. That evening was to be a retirement party for my mom’s best friend’s husband. We stopped in to let them know we had arrived, but didn’t want to get in the way of their preparations. We decided to go to Fort Robinson, where Crazy Horse had been imprisoned. I did not want to drive any more, so Jim took over. All around were the effects of the storm in the shape of dead cattle and sheep, residual grapefruit sized hail. Hell had landed here. The windows of the fort near Crawford, had been broken out and the buildings were closed for the day. The town itself was a disaster area and would be hit again that night while we celebrated our friend’s retirement safe in Chadron away from the action only eight miles away.

Traveling in the Great Plains always brought me back to the pioneer days. The harshness of it, the wildness of it, the danger. Sod fronted houses, dug into hillsides, were the only choice for early settlers and trappers. Through that storm and as a witness to the aftermath, those dugout soddies seemed like the only sane choice. 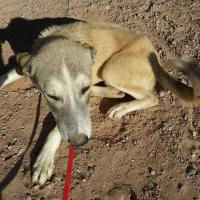