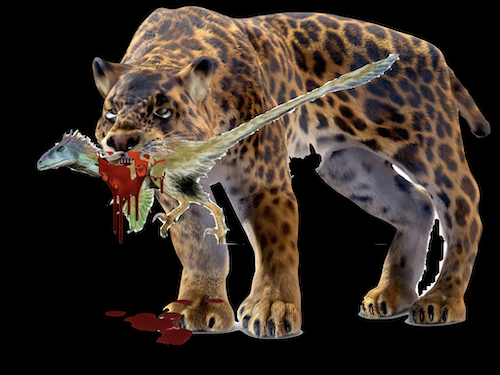 “Feathers were a nice touch, don’t you think?”

“Dude what are you doing?”

“Reading about the new discoveries about Velociraptors. They’ve learned we had feathers. They could’ve asked.”

“Yeah, well, it really doesn’t matter how often I’m on television, no one really believes what I say. They think I’m a comedian.”

“Is that why you’ve been keeping a low profile, Lamont?”

“Naw. Just kind of over that like you’re over the smilodon suit.”

“I turned in my notice. Now I have to train a new guy. He has NO idea and when I say, ‘It wasn’t like that,’ he looks at me like I’m crazy and rolls his eyes.”

“The sad thing is no one will know the difference.”

“Probably doesn’t matter in the long run whether the guy gets it or not. Lamont have you ever thought maybe we ARE delusional and we don’t really ‘remember’? Maybe we just feed into each others delusions.”

“No. The human mind has capabilities that remain untapped and LOOOOONNNNGGG term memory is part of it. We’re biological matter one way or another throughout our numerous lives. Maybe we’re a tree for a couple of hundred years. Maybe part of us goes into the sediment as a rock. Maybe part of us emerges in another life as a hermit crab or star fish. Maybe as a chimpanzee. Depending how many of our molecules assemble in a being that has at least some awareness, we’re going to remember things. If enough end up in one human, well, here we are. And if we find an old friend?”

“I don’t know, Lamont. Science doesn’t back up your theory.”

“‘There are more things in heaven and earth, Horatio, than are dreamt of in your philosophy.’ Just because science hasn’t put the pieces together yet, doesn’t mean it’s not the truth.”

“Are you saying I shouldn’t quit the smilodon gig?”

“It’s a public service, Dude. Who else can explain the smilodon camouflage better than you?”

Lamont and Dude are characters I came up with a few years ago. They have the uncanny ability to remember many of their previous incarnations. This gives them a unique perspective on life, the universe and everything.

15 thoughts on “Lamont and Dude Get Serious”