“Everywhere we learn only from those whom we love.” Goethe

I’m sure that one of the things that drives writers to drink is isolation. Between my hip rehab (now finished in a sense) and settling down to really write the Schneebelis Go to America, I’ve spent a lot of time alone. I don’t think it is easy for everyone, but it’s mostly easy for me.

I don’t know why except that my dogs are large enough to feel like companions and without pain in my hip, walking them is a lot more fun than it’s been for years. The wild life refuge — cows and all — is fully open, and I knew what I was getting into moving to a small town. Life is mostly writing, rehab and walking the dogs. Solitary bliss.

But I remember even back in San Diego where there are millions of people, and I was teaching constantly (it seemed) I was still pretty isolated. That’s just my story and has been all my life. I think it’s the result of being an introvert with a lot of resources for entertaining myself. I dunno…

But, as my dad wrote in this little poem when he was 18, if you can’t be your own friend, you’re more or less fucked. 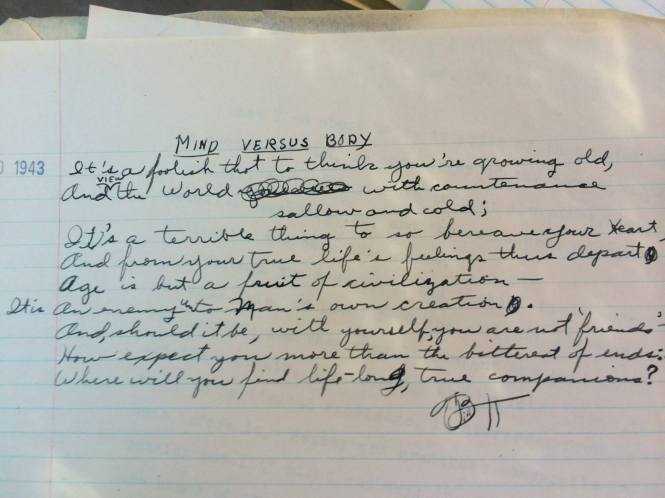 Long ago I learned to make friends with dead writers. My first such friend was Louisa May Alcott and there have been several since. My best friend among the dead writers is Goethe. When I met him, I felt I’d found a soulmate. He interests me less as a writer than as a person writing, if that makes any sense. Like a lot of people, I find some of his work dated and somewhat inaccessible in the finished (and translated) form, BUT conceptually, a lot of that very same work is incredibly engaging and I love many of his small poems, one of which is kind of my life-mantra:

I won’t translate it, having learned that everyone who loves Goethe has a proprietary feeling about anything they read and this has been translated infinitely (like the gods?) and my translation will be debated by someone with far more authority than I have. Just know it’s an argument for stoicism, patience and acceptance and says, basically, that you can expect to experience infinite joy and infinite suffering as the beloved of the gods. That’s true to my experience. 🙂

Among all the beautiful things he wrote my favorite is something he didn’t write. It’s a kind of diary of conversations written by his secretary Johann Peter Eckermann. Back when I was traveling more, Conversations with Goethe was the only book I carried. Reading it is really like talking to Goethe or, at least, listening to him. I’m grateful he lived a long life because his old age is a good guide to me for mine.

I’ve written a birthday “card” to Goethe every year I’ve written a blog. My feelings for him have not changed, but I have little new to add. If you are curious, you can read:

And that’s just the stuff for his birthday SINCE I’ve had a blog on WordPress. I celebrate every year. I have Goethe Birthday posts on my old Blogger blog (Private, sorry). I used to try to celebrate in some more celebratory way, like a walk on the beach with a friend or pizza, but I soon learned that Goethe’s Birthday is not widely known as a holiday.

I’ve written many more posts beyond his birthday that discuss him, his poetry and our undying love. 😉 This one is probably the best, but be prepared for a long read…

The Heroism of Mere Survival

However you celebrate it, have a wonderful Goethe’s birthday.

“People are always talking about originality; but what do they mean? As soon as we are born, the world begins to work upon us, and this goes on to the end. What can we call our own except energy, strength and will? If I could give an accound of all that I owe to great predecessors and contemporaries, there would be but a small balance in my favour.” Goethe from Conversations of Goethe